Before you design an electronic project, you need to know what a circuit is and how to create one properly.

The word “circuit” sounds like “circle,” and a circuit needs to be circular to work. The wires have to go from the power source to the device and back again, so that the electrons can go out and come back.

An electronic circuit is a circular path of conductors by which electric current can flow.  A closed circuit is like a circle because it starts and ends at the same point forming a complete loop. Furthermore, a closed circuit allows electricity to flow from the (+) power to the (-) ground uninterrupted.

A simple circuit has conductors, a switch, a load and a power source. Here are the functions of each part:

Switch:
The switch is simply a small gap in the conductor where you can close or open the circuit. When the switch is closed, the circuit is closed and electricity flows.

The Load:
The load is a small light bulb or buzzer that lights when the circuit is turned on. The load is also known as a resistor.

Cell:
The power source is a cell. (Note that more than one cell put together is known as a battery) 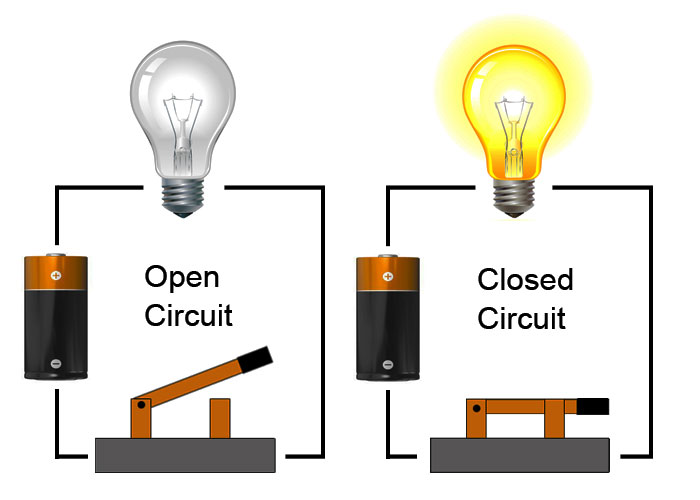 All circuits need to have three basic elements.  These elements are a voltage source, conductive path and a load.

The voltage source, such as a battery, is needed in order to cause the current to flow through the circuit.  In addition, there needs to be a conductive path that provides a route for the electricity to flow.  Finally, a proper circuit needs a load that consumes the power.  The load in the above circuit is the light bulb.

A resistor in a circuit is anything that uses some of the power from the cell. In the example below, the resistors are the bulbs. In a series circuit, the components are arranged in a line, one after the other.

Take a look at the diagram below:
The schematic drawing is a better way to draw a series circuit.

Each time there is damage (break) in any one of the resistors the entire circuit will not function. For example, if one light bulb goes out, all the other lights will go off because the electricity path in the broken bulb is cut off.

If there are many bulbs in a circuit with a battery (cell), it is very likely that the light will be dimmer because many resistors are acting on the same voltage of power from the battery.

In a parallel circuit, there is more than one resistor (bulb) and they are arranged on many paths. This means electricity (electrons) can travel from one end of the cell through many branches to the other end of the cell.

Look at the illustration below involving two resistors in a parallel circuit:

From the above, it is clear that electricity from the cell can take either path A or Path B to return to the cell. The great thing about parallel circuits is that, even when one resistor (bulb) burns out, the other bulbs will work because the electricity is not flowing through one path.

Think of all the light bulbs in your home. If one bulb burns out, the other bulbs in the rooms still work.

What is a short circuit?

A simple, well-designed circuit, as discussed earlier, has a cell providing current along a path (wire), to a load (resistor) and back to the other end of the cell as shown in this diagram.

As the voltage gets to the resistor (load), there is a power drop, because the resistor uses some of the electricity up to produce heat and light. This means that the voltage that ends up at the other side of the cell is reduced.

In a short circuit, there is no load. For many reasons, the wires in a circuit can find a short-cut, bypassing the load (and other components). This causes the same voltage from the cell to flow to the other end of the cell. When this happens the high voltage causes the wires to heat up and catch fire.

Can you think of some reasons why there could be a short circuit?
Here are a few:

Wires may loose their insulation and touch each other in the circuit
There could be a fault (improper wiring) in a device
Intentionally connecting both ends of a cell / battery with wires. This causes a massive drain of electricity and the battery looses its power in a very short time.

A short circuit can cause heating, melting of wires, harmful smoke and smell, and blinding light (like what you see during welding)

It is very important that electrical devices in homes, cars, aeroplanes and other complex machines are protected from higher voltage than the wires are designed to take — otherwise, the devices can break and even catch fire.

In real life electrical circuits, it is possible that wires (conductors) loose their insulation and come into contact with the ground or other conductors. If that happens, the voltage in the wire will have no resistor (load) and the same high voltage will be returned to the source of power.

This can result in overheating, as there is way too much voltage than the wires can take. Overheating will then cause melting and eventually a break (open) in the circuit.

One way to protect a circuit is to add a fuse, circuit breaker or thermal breaker to the circuit.

These work in similar ways, but let us consider a fuse in more detail:

A fuse is simply a strip of alloy wire (made of bismuth and tin), which is connected to the circuit. The fuse is usually designed to take specific volumes of electricity (voltage). For example is a 3amp fuse is fixed into a circuit — it cannot take any more than 3amps of electricity. If for any reason, there is a surge or increase in the voltage, the fuse will melt immediately and break. This will stop the flow of high voltage and prevent any potential damage to the circuit or device.