Light Dependent Resistors (LDR) are also called photoresistors. They are made of high resistance semiconductor material. When light hits the device, the photons give electrons energy. This makes them jump into the conductive band and thereby conduct electricity.

This LDR circuit diagram shows how you can make a light detector. An LDR or “Light Dependent Resistor” is a resistor where the resistance decreases with the strength of the light.

Here is the schematic for the circuit:

Therefore, no current will go from the collector to the emitter of the transistor. All the current will instead pass through the LDR and the potentiometer.

This makes the LED light up.

Another Method By Slight Change

You can also make the LED turn ON when it is dark instead of when it is light. To do this, replace the NPN transistor with a PNP transistor like this: 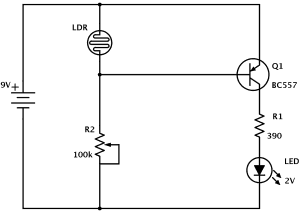