Resistors are used to resist the flow of current or to control the voltage in a circuit.  The amount of resistance that a resistor offers is measured in Ohms.  Most resistors have colored stripes on the outside and this code will tell you it’s value of resistance.  You can use a multimeter or Digikey’s resistor color code calculator to determine the value of a resistor.

A variable resistor is also known as a potentiometer.  These components can be found in devices such as a light dimmer or volume control for a radio.   When you turn the shaft of a potentiometer the resistance changes in the circuit.

A light-dependent resistor is also a variable resistor but is controlled by the light versus turning a knob.  The resistance in the circuit changes with the intensity of the light.  These are often found in exterior lights that automatically turn on at dusk and off at dawn.

Capacitors store electricity and then discharges it back into the circuit when there is a drop in voltage.  A capacitor is like a rechargeable battery and can be charged and then discharged.  The value is measured in F (Farad), nano Farad (nF) or pico Farad (pF) range.

A diode allows electricity to flow in one direction and blocks it from flowing the opposite way.  The diode’s primary role is to route electricity from taking an unwanted path within the circuit.

A light-emitting diode is like a standard diode in the fact that electrical current only flows in one direction.  The main difference is an LED will emit light when electricity flows through it.  Inside an LED there is an anode and cathode.  Current always flows from the anode (+) to the cathode (-) and never in the opposite direction.  The longer leg of the LED is the positive (anode) side.

Transistor are tiny switches that turn a current on or off when triggered by an electric signal.  In addition to being a switch, it can also be used to amplify electronic signals.  A transistor is similar to a relay except with no moving parts.

An integrated circuit is a circuit that’s been reduced in size to fit inside a tiny chip.  This circuit contains electronic components like resistors and capacitors but on a much smaller scale.  Integrated circuits come in different variations such as 555 timers, voltage regulators, micro controllers and many more.  Each pin on an IC is unique in terms of it’s function. 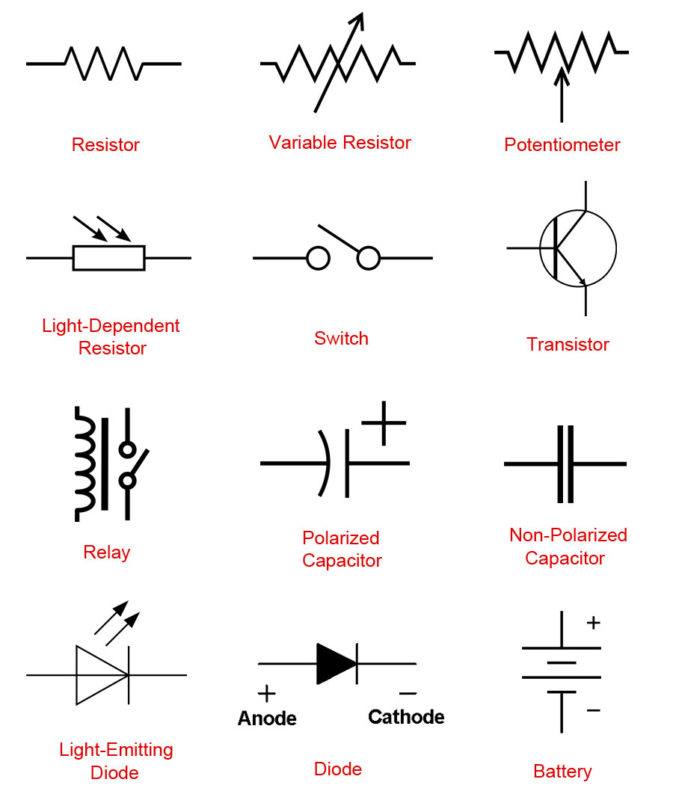