What is a Diode?
A Diode is the simplest two-terminal unilateral semiconductor device.  It allows current to flow only in one direction and blocks the current that flows in the opposite direction. The two terminals of the diode are called as anode and cathode. The symbol of diode is as shown in the figure below.

Ideally, in one direction that is indicated by the arrow head diode must behave short circuited and in other one that opposite to that of the direction of arrow head must be open circuited. By ideal characteristics, the diodes is designed to meet these features theoretically but are not achieved practically. So the practical diode characteristics are only close to that of the desired.

How To Connect A Diode

Let’s look at an example. 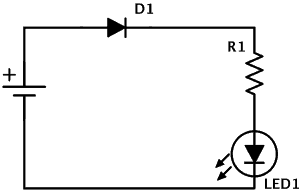 In the circuit above the diode is connected in the right direction. This means current can flow through it so that the LED will light up.

But what happens if we connect it the other way around? 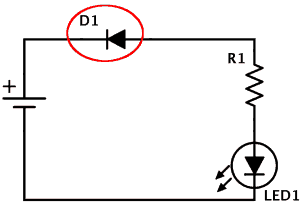 In this second circuit the diode is connected the wrong way. This means that no current will flow in the circuit and the LED will be turned OFF.

How a Diode Works

The diode is created from a PN junction. You get a PN junction by taking negative doped and positive doped semiconductor material and putting it together. 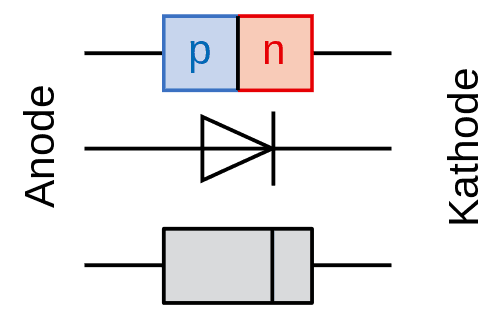 At the intersection of these two materials a “depletion region” appears. This depletion region acts as an insulator and refuses to let any current pass.

When you apply a voltage in the other direction, from the negative to the positive side, the depletion region expands and resists any current flowing.

The Most Standard Diodes

The rectifier diode is typically used for rectifying alternating current (AC) to direct current (DC). They can usually handle big currents and voltages. Sometimes referred to as power diodes. 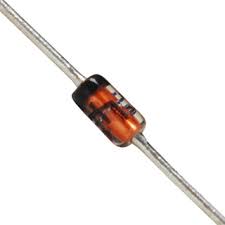 The most typical signal diode is the 1N4148. The zener diode is a component that will become very conductive (meaning that it will allow lots of current) for a certain voltage. This voltage is called the zener voltage.

Other Types of Diodes

It is also much faster and is therefore often used in RF circuits.

A light emitting diode or LED is a diode that emits light when forward biased. It is available in several different colours, even ultra-violet and infrared.

A photodiode is a diode that conducts when it detects light. Could be used to receive the infrared signals from a remote control.